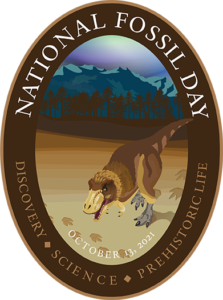 An Alaskan tyrannosaur is walking under a northern polar night sky, through a mudflat, and encountering a trackway left by a hadrosaur (duck-billed dinosaur). In the distance, an ancient boreal forest outlines the Cretaceous landscape. The Late Cretaceous (100 to 66 million years ago) represents the end of the Mesozoic Era and the height of dinosaur diversity.

The National Park Service and the American Geological Institute are partnering to host the annual National Fossil DayTM on October 13, 2021 during Earth Science Week.

National Fossil DayTM is a celebration organized to promote public awareness and stewardship of fossils, as well as to foster a greater appreciation of their scientific and educational value.

Art Contest 2021 – pick any fossil, specific prehistoric organism, prehistoric reconstruction, and/or a collage of all the above from any of the 279 National Park Service areas that have fossils.

20 Ideas to Discover Fossils – Learn about fossils and paleontology in National Parks.

Prehistoric Life in National Parks Coloring Book – featuring 40 drawings of ancient plants and animals that have been found fossilized in national parks.

Ventura County is home to a wide range of fossils 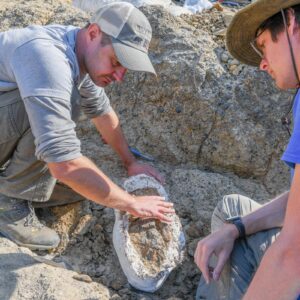 In 2017 and 2018, Dr. Jonathan Hoffman from the Santa Barbara Museum of Natural History excavated the skull and skeleton of a potentially new species of sea cow on Santa Rosa Island. The fossils from that excavation also include mollusks and crabs that give researchers clues to what the environment was like millions of years ago.

In September 2016, it was announced that the skull and tusks of “Larry” was discovered on Santa Rosa Island.  The find appears to be a young Columbian Mammoth.  Further research will be needed to confirm if it is a Pgmy, Columbian or something in between.  The nickname honors the discoverer, Peter Larramendy, and leading mammoth expert Larry Agenbroad.

The most complete Pygmy Mammoth ever found, was discovered in 1994, on Santa Rosa Island.  A replica can be seen for free at the Channel Islands National Park Visitors Center.

In April 2005, a Southern Mammoth fossil was discovered in Moorpark during the construction of new homes.  In the same location, parts of a Columbian Mammoth, Western horse, a large-headed llama, a rabbit, a kangaroo rat and other rodent ancestors were discovered.  A Mammoth Sculpture for Kids to Play on is a feature of the Mammoth Highlands Park in Moorpark. 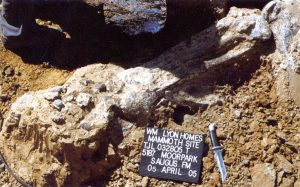 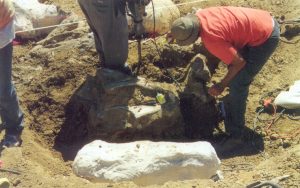 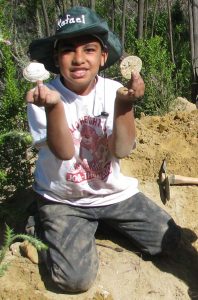 As part of the Tri-County Education Committee, we have donated two general Fossil Boxes to the Ventura County Library System.  These  Boxes are available for Educators to check out.